I don’t always blog, but when I do I’m very picky about styling. You probably can’t tell by the state of this blog – I haven’t added much custom styling at all. This is actually almost fully the out-of-the-box Jekyll Bootstrap site. I’m working on a very cool (imo) style for this blog, but it’s nowhere near ready yet.

But now that I’m into programming, I figured I am going to want to blog using code snippets here and there. I like a good syntax highlighting color scheme, and I’ve seen some very impressive ones on some peoples’ blogs – pre styling that made programming look downright sexy. So I got to work.

The first thing I did - tangential to this blog post - was install in assets all of the pygment stylesheets from here, bulk-change some of the class names to work with what Pygment outputs, and then add some code to my Jekyll layouts so that all I have to do is change highlighter_style: name in the _config file to match the file name.css for whatever stylesheet I wanted, or change the same property in the frontmatter of any post or page – so now it’s that easy for me to change to a different syntax highlighter.

Now with those style sheets taken care of, my thoughts came to this: with my prior experience with Jekyll (I had a Jekyll blog on this same domain that I completely scrapped), I remember having one problem that really bugged me: highlight lang linenos. I wanted line numbers presented with my code, but just using {% highlight python linenos %} placed the numbers inline with the code – an obvious problem for copy-pasting. (btw, if you’re wondering how I just posted liquid tags within a Jekyll post, check out this link or view my source code)

I’ve been interested for a long time in potentially writing guides and books on programming or web design, and so this functionality is actually pretty important to

Some googling and I found out how to get code snippets produced by pygments that allowed for copy-pasting without copying the line numbers. thanpolas posted about it. You’ll see a similarity between the title of his post and the title of my post, but I’ve gone a step further than him.

What I learned from him was that {% highlight python linenos=table %} outputs the code in a separate pane from the line-numbers. GREAT PROGRESS! I tried it and it worked!

In his post, thanpolas notices line wrapping problems, comes up with a solution that he acknowledges is incompatible with GitHub pages, and calls it a day. But that wasn’t good enough for me.

I’ve solved it, in a way that doesn’t have wrapping problems, and works out-of-the-box in Jekyll for GitHub, no special Ruby scripts required. Here, take a look:

In addition to the line-wrapping problems that he saw, I also noticed the following things in the case of my blog: 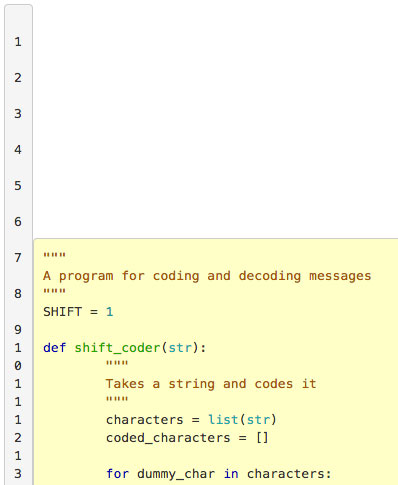 I added only a total of 12 lines to my css file - and that’s 12 prettified lines - though I’m not sure how much of the solution came from using Bootstrap in the first place. Here’s what I added:

Line 2 above used to say 'overflow:scroll' rather than 'overflow-x:auto' -- this looked fine on my Macbook but thanks to an observant reader I found soon that it had a very wonky effect on Windows.

The last 3 solved the problem of the linenumbers wrapping strangely.